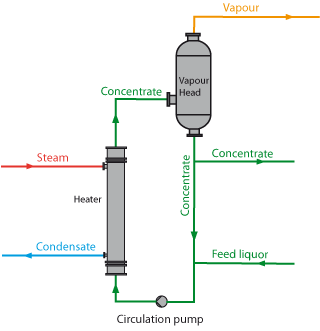 These type of evaporators some mechanical device are fitted to circulate the contents heating in it. For example an evaporating pan in which the materials is agitated by a stirring rod or by a mechanical propeller.

The liquid is circulated by means of a pump and as it is under pressure in the tubes the boiling point is raised and no boling take places. And it enters the body of the evaporator.

The liquid film moves down the tubes by gravity force. Heat applied through the tube wall effects boiling-off the light fraction from the film. The picture shows a co-current operating evaporator with vapour and liquid leaving the bottom of the evaporator into the separator vessel.